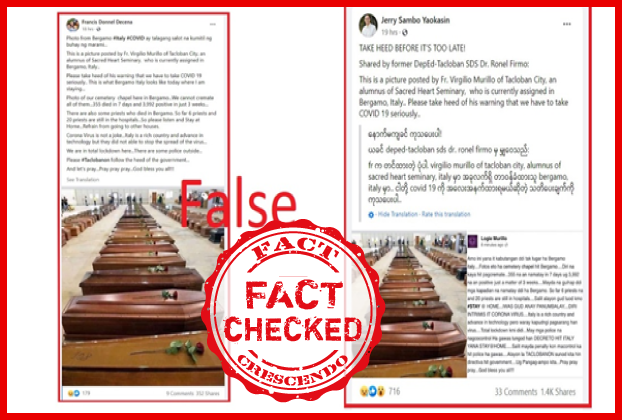 Coronavirus infection spreads intensively in Italy and has had a serious impact on Italy, which is known in Europe as a country with many elderly citizens. By March 19, more than 35,000 people in Italy had contracted the coronavirus, and nearly 3000 had died from pandemic according to worldometers.info.

In such scenario, a photo of coffins was posted by a Facebook profile named “Francis Donnel Decena” with the following caption: “photo of our cemetery chapel here in Bergamo…We cannot cremate all of them…355 died in 7 days and 3,992 positive in just 3 weeks”.

Another Facebook profile named ” Jerry Sambo Yaokasin “also posted the image with same narrative. The screenshot and links of the post can be seen below.

So is it really an image that shows the level of carnage wrecked in Italy by the COVID-19 pandemic? Are the bodies lying in the coffin actually of people who died of COVID-19? The answer to these questions is NO. This image is old and not related to the current COVID-19 outbreak in Italy. Let’s see how we found out the reality of this image.

If we look at the photo carefully, the place where coffins are laid seems to be a hall and does not look like a cemetery chapel. We subjected the image to Google reverse image search. While examining the search results, we found several photos including the one from The Sun article updated on April 5, 2016. The screenshot of the search result is given below:

We also found an article published by a UK based prominent news website The Gaurdian which featured the image in question. The details given in the article about the image are as follows: Coffins of some of the African migrants killed in a shipwreck off the Italian coast sit in a hangar at Lampedusa airport in October 2013. Photograph: Tullio M Puglia/Getty Images. The screenshot of the article along with the link can be found below:

As seen in the details, the credits for the image has been attributed to Getty Images. Hence, we searched Getty images with the details provided in the article and we found the image which can be seen below:

In the month of October in 2013, African migrants, hopeful of seeking asylum in Italy, met with a horrible ship wreck off the coast of Lampedusa, Italy. The ship carrying hundreds of migrants caught fire near the harbor of Lampedusa and killed the migrants on the ship. As the ship caught fire, people tried escaping by jumping off the ship but they were unable to make it to the coast. The coffins seen in the picture is of the dead African migrants who perished while trying to swim to the Italian shores.

The photos used in the posts to claim that these coffins in the image are of people who died in Italy due to COVID-19 are exactly the same images used in the news articles reporting the shipwreck incident that took place 7 years ago.

The image used in the viral Facebook posts claimed to be the coffins of victims of COVID-19 in Italy are actually 7 years old and have no relation to the current situation in Italy. The image is of the coffins of African migrants who died in a shipwreck in 2013 off the coast of Italy while attempting to enter Italy in pursuit of seeking asylum in the country. 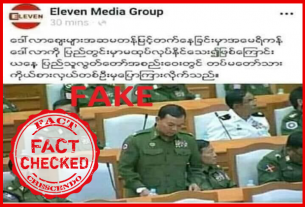 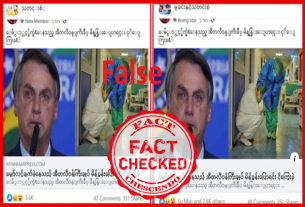 FACT CHECK: No, this is not the image of Hapless Italian PM crying while addressing the nation. 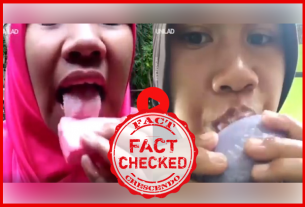